An eclectic collection of the food available around Charminar

Charminar on a busy evening

The Charminar (lit. “four minarets”) is a monument located in Hyderabad. It’s recognised globally as a symbol of Hyderabad and it’s culture. Built at the centre of the city originally to commemorate it’s foundation (and also to mark the eradication of a cholera epidemic), Charminar now stands centered in the hussle-bustle of the “Old City” and it’s vibrant society.

The Deccani cuisine is variant and doesn’t suffer from a lack of variety. There are many dishes which can be said to represent the cuisine and locals will start a tempestuous argument upon the exclusion of any such dish from the Dastarkhān. This article doesn’t intend to provide a list of the most authentic or representative dishes. It is a collection of my food experiences around Charminar in a format possible to conclude in a single visit and also gives an opportunity to see some of the monuments around. A heritage walk and a menu dégustation combined, if you will.

There is no provision for four-wheeler parking anywhere close to Charminar. The parking for two-wheelers is also sketchy and you will end up parking in some by-lane nearby. You can take a metro to the MGBS metro station and walk from there. The suggestion is to reach the neighbourhood by two-wheeler or by public transport. You will have to walk between places, so be ready to walk around 10 kilometers throughout the day. The pedestrianisation of the immediate vicinity of Charminar also makes it impossible to complete the entire trip on a vehicle. 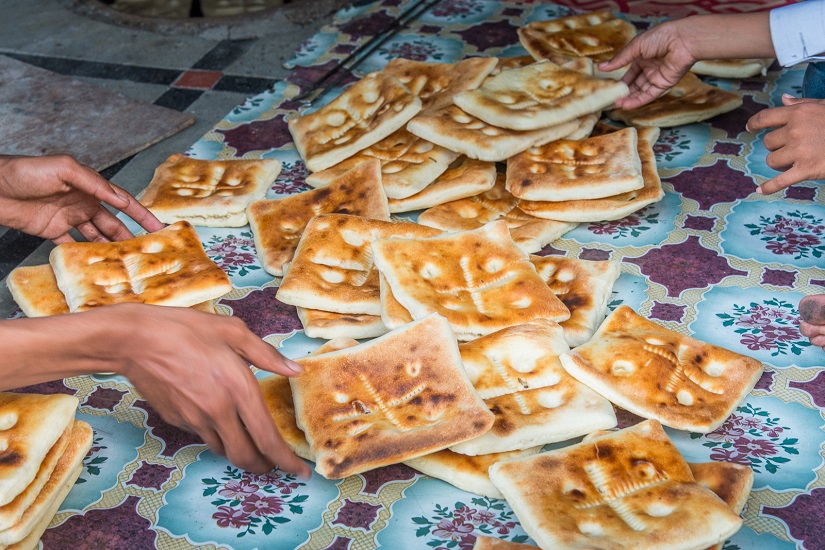 Founded in 1851 by Mohammed Hussain Saheb, who worked as a Munshi(Persian word for contractor/secretary) in an office under the fourth Nizam of Hyderabad, This shop arguably serves the best Naan around town. He learnt making the Naan on a visit to Delhi. The shop is situated in the Purani Haveli area, the operation goes on oblivious to the traffic around. There are many other shops with the same name, but the one in Purani Haveli is the authentic one.

Get a Char Koni Naan (lit. “four cornered bread”) per person packed from Munshi Naan and head to the next destination. 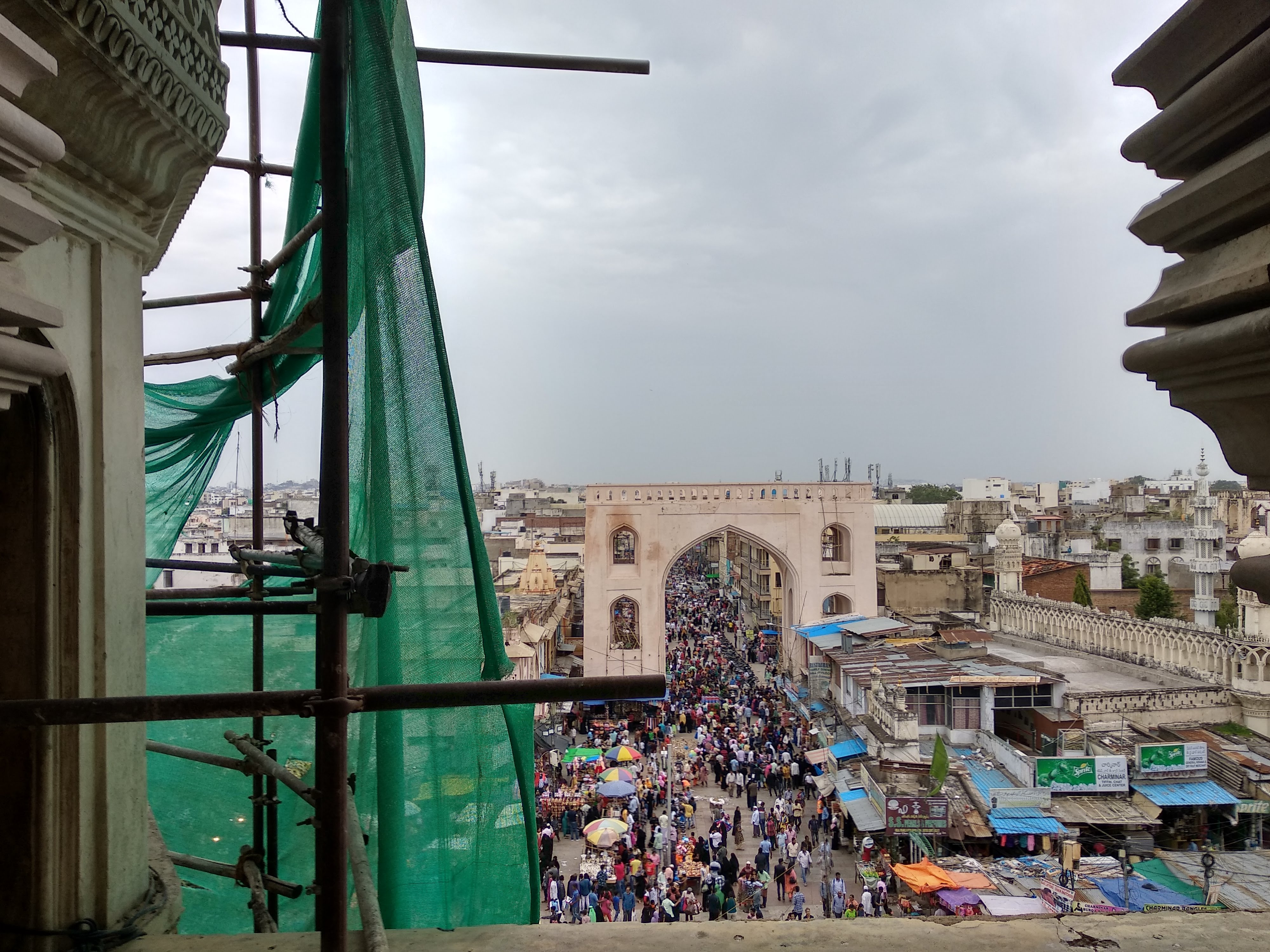 View of Charminar Kaman from atop the Charminar

If you head south from Munshi Naan down the Mir Alam Mandi road and take a right into the Kali Kaman road and go past Kali Kaman, you’ll arrive at the historical fountain “Gulzar Houz” built 400 years ago. From this place, the Char Kaman(lit. four gateway/arches) are visible, The east kaman which we just crossed - Kali Kaman, the western one called the “Kaman-e-Sehar-Batil” (lit. “the arch of the magic breaker”), the northern one called Machli Kaman(lit. “arch with a fish”) and the southern one - Charminar Kaman is visible along with a view of the Charminar itself. In the olden days, A big fish made of bamboo and paper was left hanging at Machli Kaman on the lunar new year, hence the name. Initially called the “Kaman-e-Sehar-Batil” (lit. “The arch of the magic breaker”), the name is now corrupted to “Sher-e-Batil”. It was a gateway that lead to an area that housed lot of royal palaces extending up to the river Musi, these palaces no longer exist. Mir Momin (The planner of Hyderabad & then Peshwa) erected a large stone pillar to its side and inscribed verses to ward of evil spirits. That’s how the name came to be. Continue from Gulzar House towards and past Charminar to find Nimrah Cafe & Bakery. 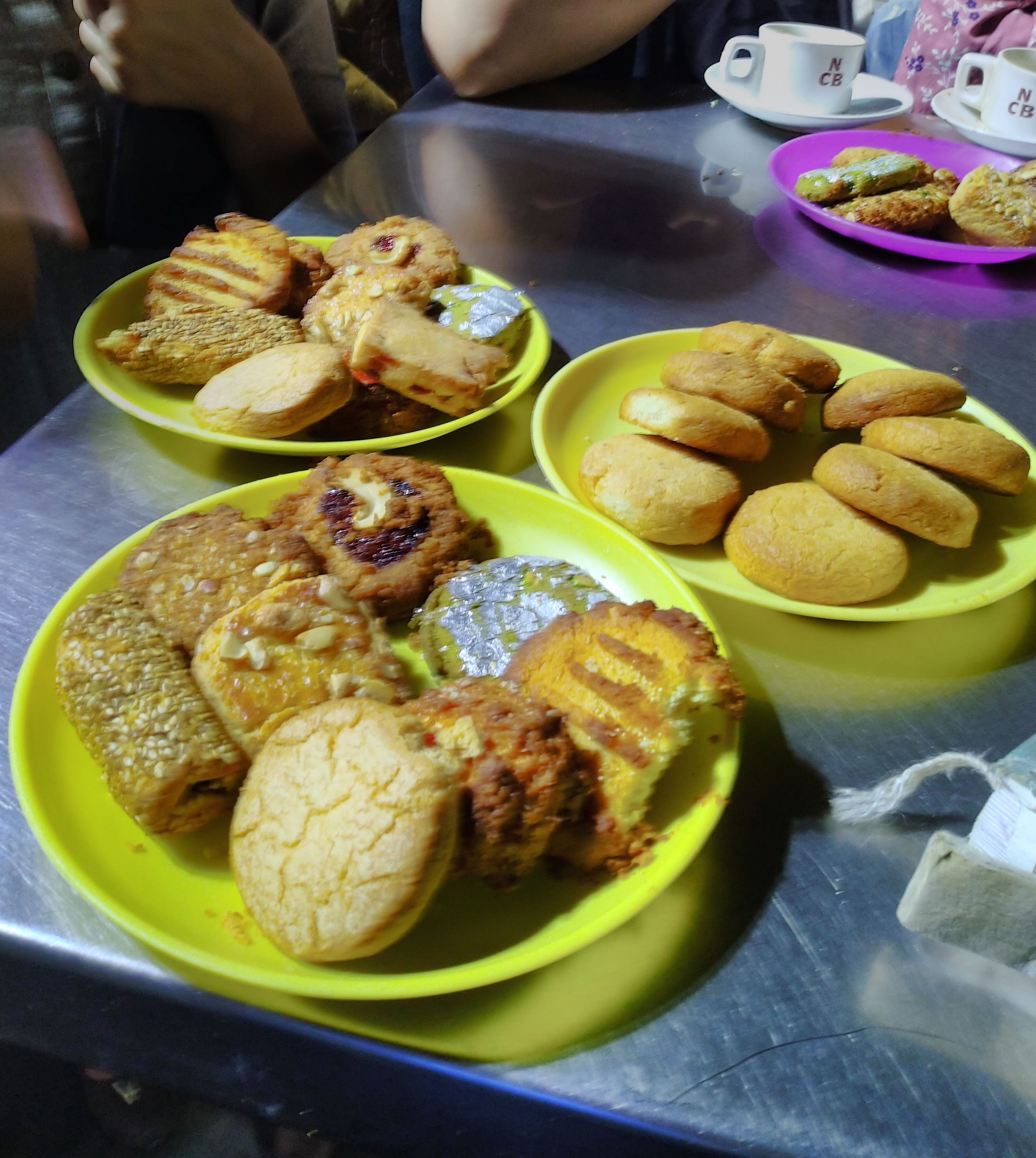 Nimrah opened in 1993 and is one the original Irani cafes in the city. It opens early in the morning and serves authentic Irani Chai and biscuits throughout the day. Order an Irani Chai and an assorted platter of biscuits(and Osmania biscuits for tasting their speciality). They also serve butter buns, Dil Khush, milk & fruit breads and bake new stock once every half an hour. They have varieties in Chai too for personal preference - Pauna (Milkier, three-fourth milk and one-fourth decoction), Sulemani (Black tea), Khade Chamach ki Chai(lit. “The tea with standing spoon”)(Chai that purportedly has so much sugar that it’ll make a spoon kept in stand up), Cutting Chai(Stronger and smaller serving).

Stand outside Nimrah, sip some Chai and take in the beauty of the heritage structures around - Charminar, Unani Hospital and the Mecca Masjid. 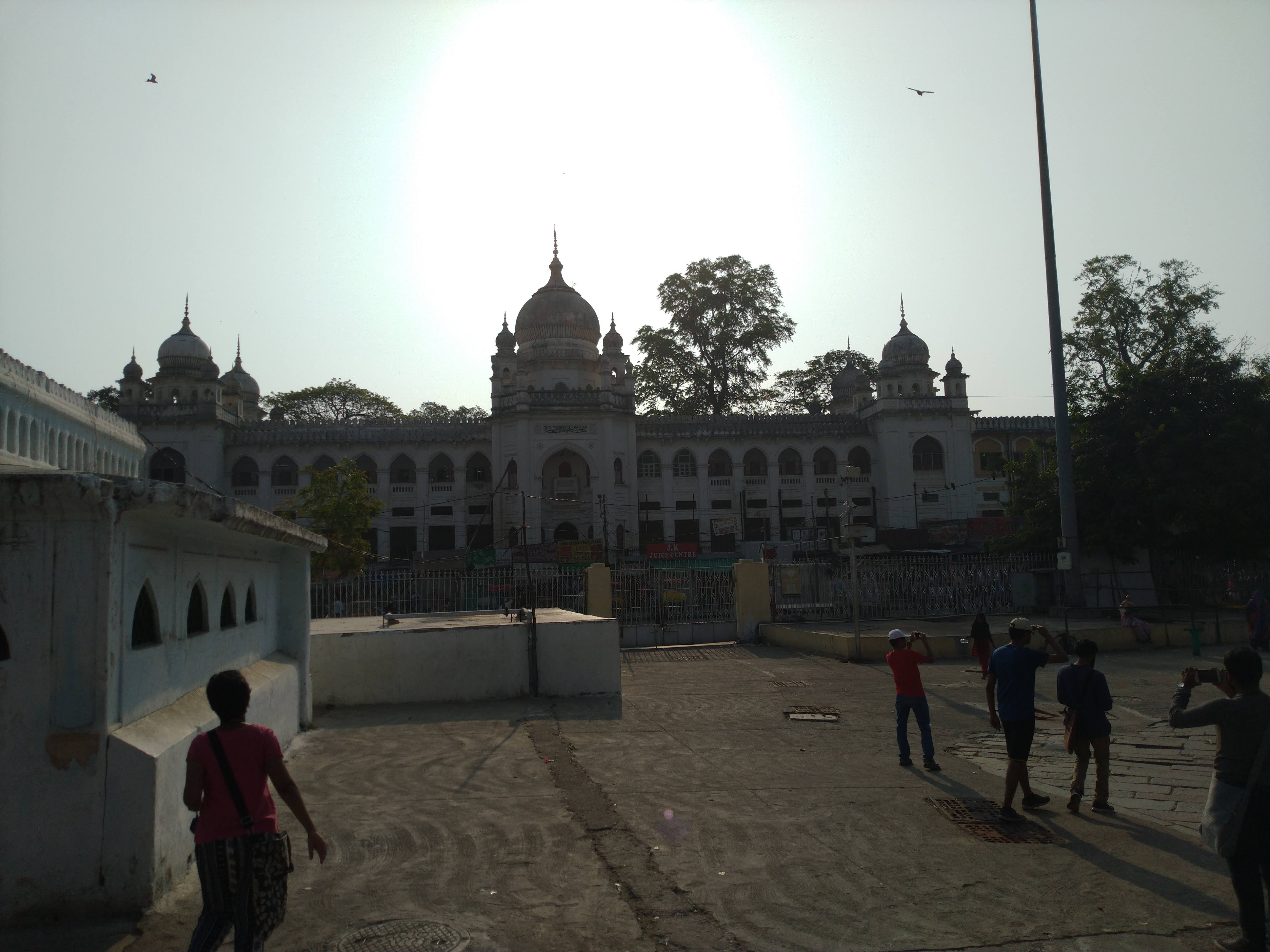 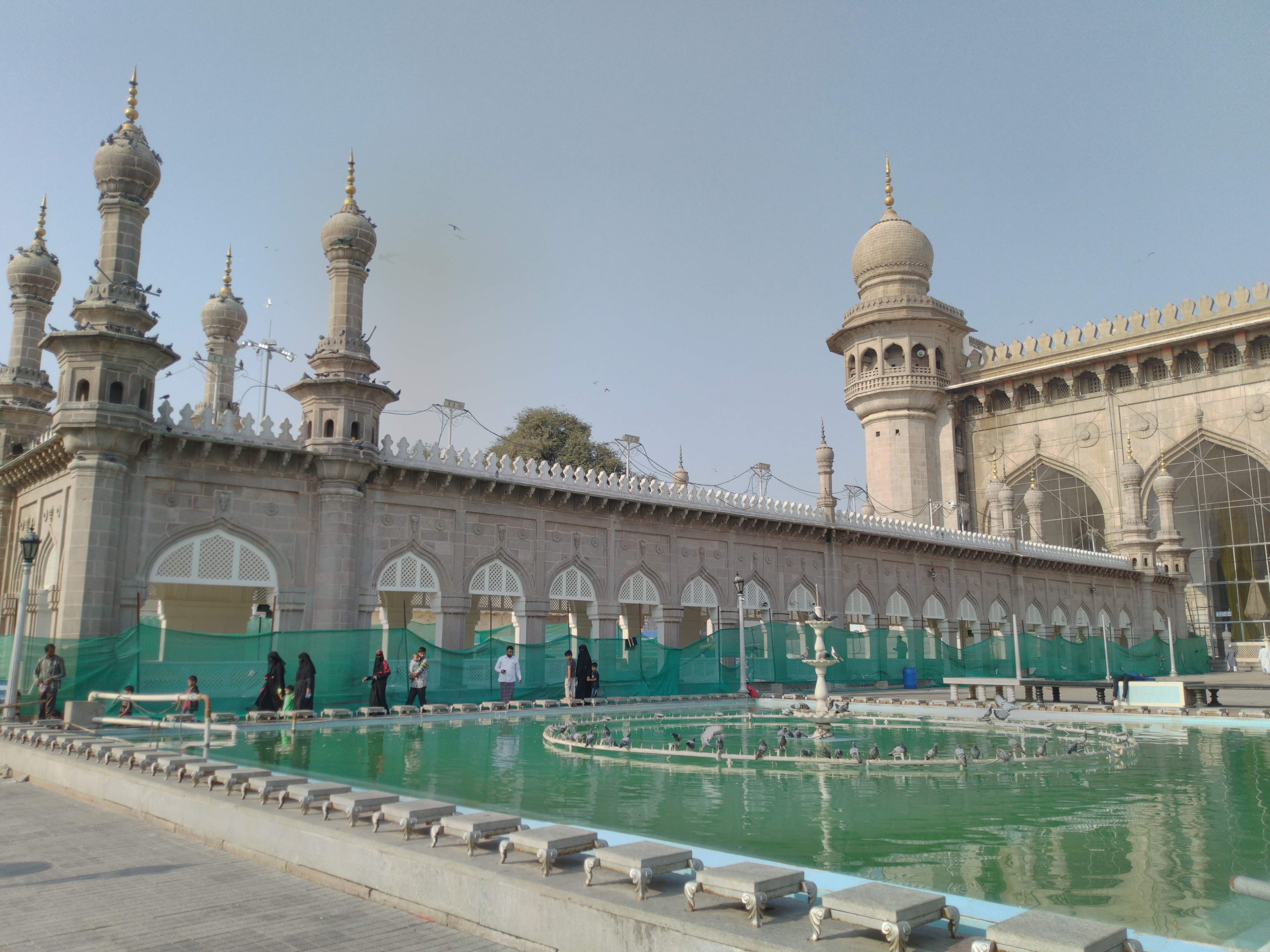 The Hauz at Mecca Masjid
* A Hauz (lit. water tank) is a place to cleanse oneself in a mosque before prayer 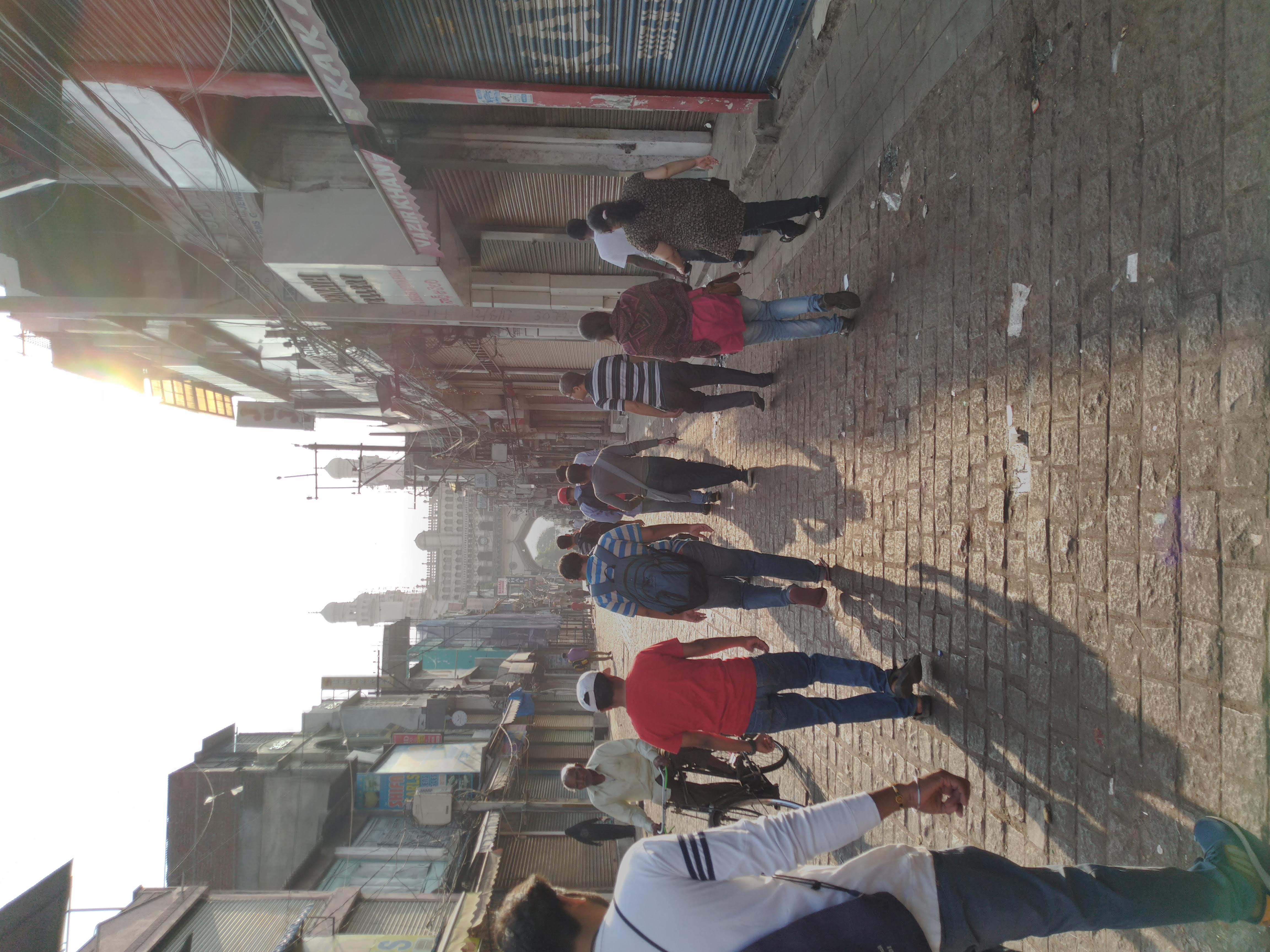 Walk through Laad Bazaar to head to our next destination. Laad Bazaar(Laad meaning lacquer is used to make bangles) is a very old market popular for Bangles. This Bazaar consists a one kilometer stretch of shops and has been operating since the 16th century. It is popular for bangles, sarees and wedding related items. Take a left turn from Laad Bazaar onto Moti Galli road to find Rumaan Restaurant.

Get seated in the first floor of Rumaan and order a Paya(lit. “legs/hooves”). A single Paya serves 3 people comfortably. Paya is a soup of mutton legs slow cooked over mild heat with a variety of spices. Sneak out the Naan you got packed from Munshi Naan and eat it with the Paya. While Rumaan offers Naan too, nothing beats Munshi Naan.

Just around the corner, you’ll find Chowmahalla Palace(from chār mahallāt, lit. “four palaces” in Dakhni). Seat of the Asaf Jahi Dynasty and the official residence of the Nizam, Chowmahalla currently hosts a museum, a clock tower that’s been ticking away since 250 years give or take, the Nizam’s luxury car collection (vintage) and a souvenir shop to buy books and pearls. Worth a visit if you can spare some time. 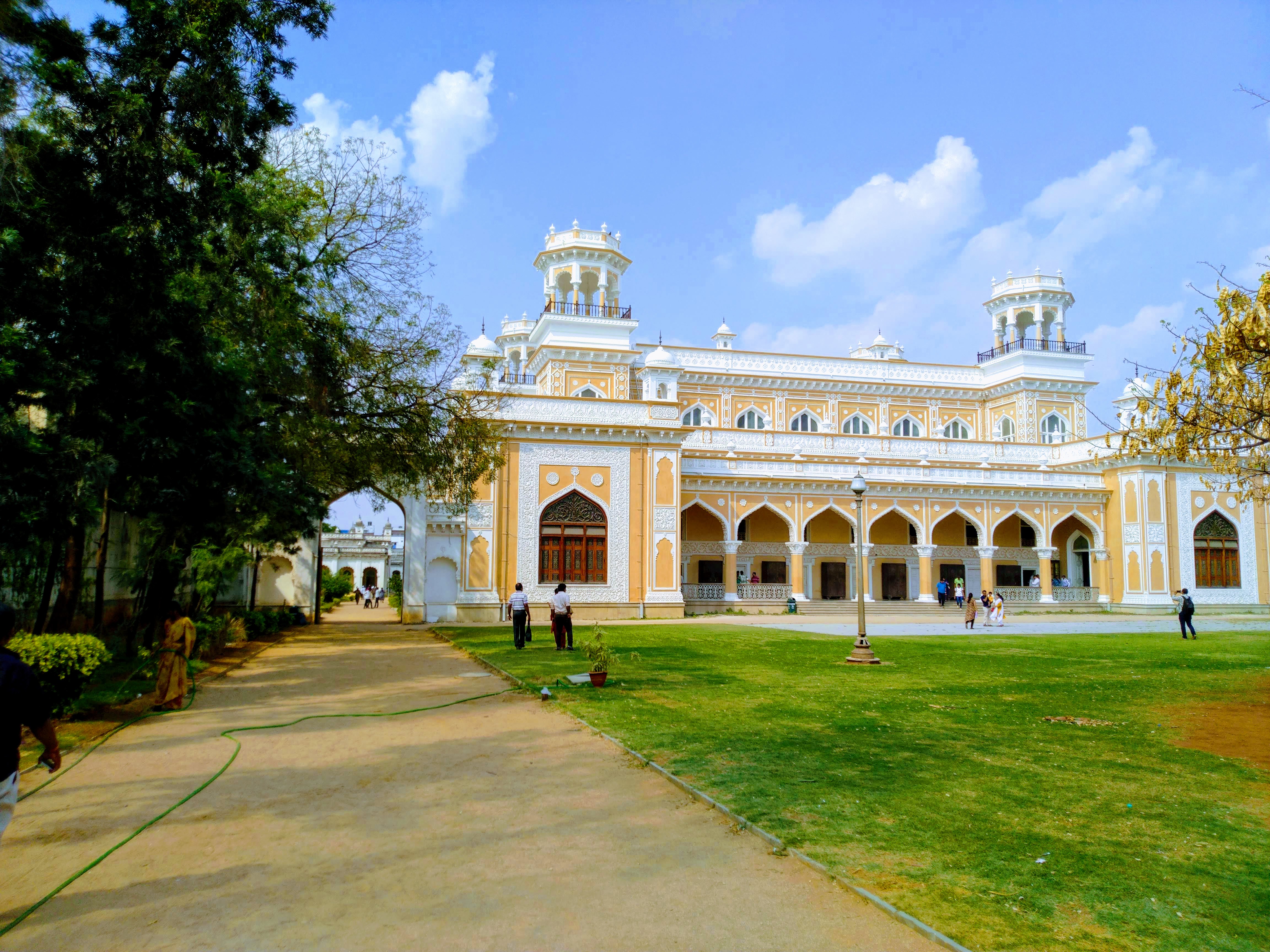 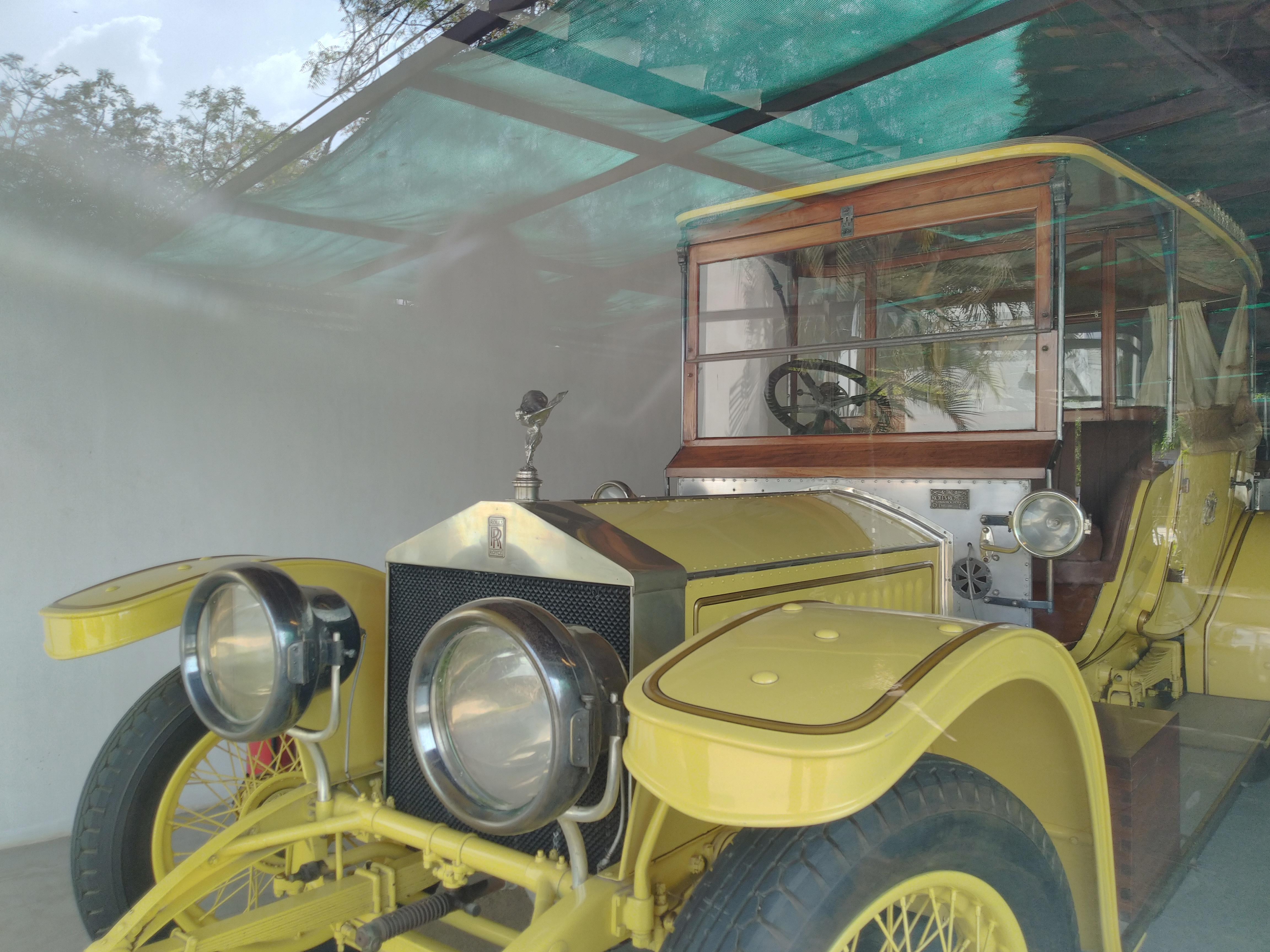 A Rolls-Royce in the Nizam’s collection

The seventh Nizam - Hyderabad’s last ruler had a lifelong obsession with cars. The richest man on the planet until he died, It is said when Rolls-Royce Motor Cars Ltd refused to sell their car to Mir Osman, he bought some old Rolls-Royce cars and used them for garbage collection, which damaged the image of the British luxury automobile maker. The company requested him to stop and began gifting him cars. Eventually he had acquired 50 Rolls-Royces.

Walk towards Moghalpura road from Moti Galli road and take a turn towards charminar to find Al Akbar Fast Food Corner. This location is marked a bit sketchily on maps, so ask the locals. Sit in the first floor or the family section if they allow(read. if there’s a girl/woman in the group). Order Chicken 65 Boneless and Warqi Paratha. Enjoy a scrumptous chicken dish with the soft paratha. 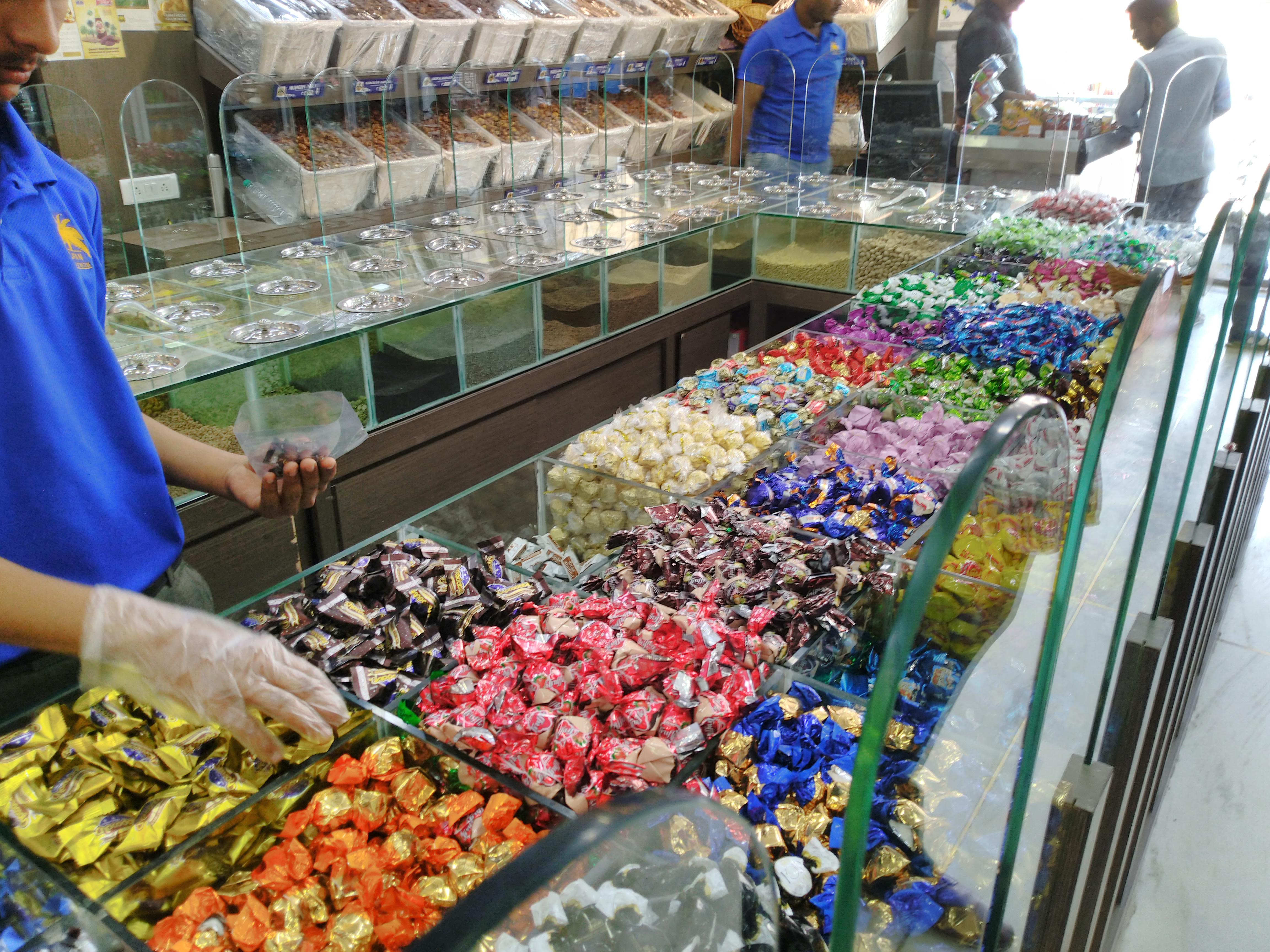 Candy and nuts at Afjan

If you want to carry some stuff back home for kids or relatives, head straight past Charminar from Al Akbar to Afjan Dates & Nuts. They have a huge collection of dry fruits, candy, chocolates and coated dates.

Head back past Charminar if you’ve visited Afjan or cross the road if you’re at Al Akbar to find Milan Juice Center. Order Malai & Mulberries to cool the stomach a little bit. 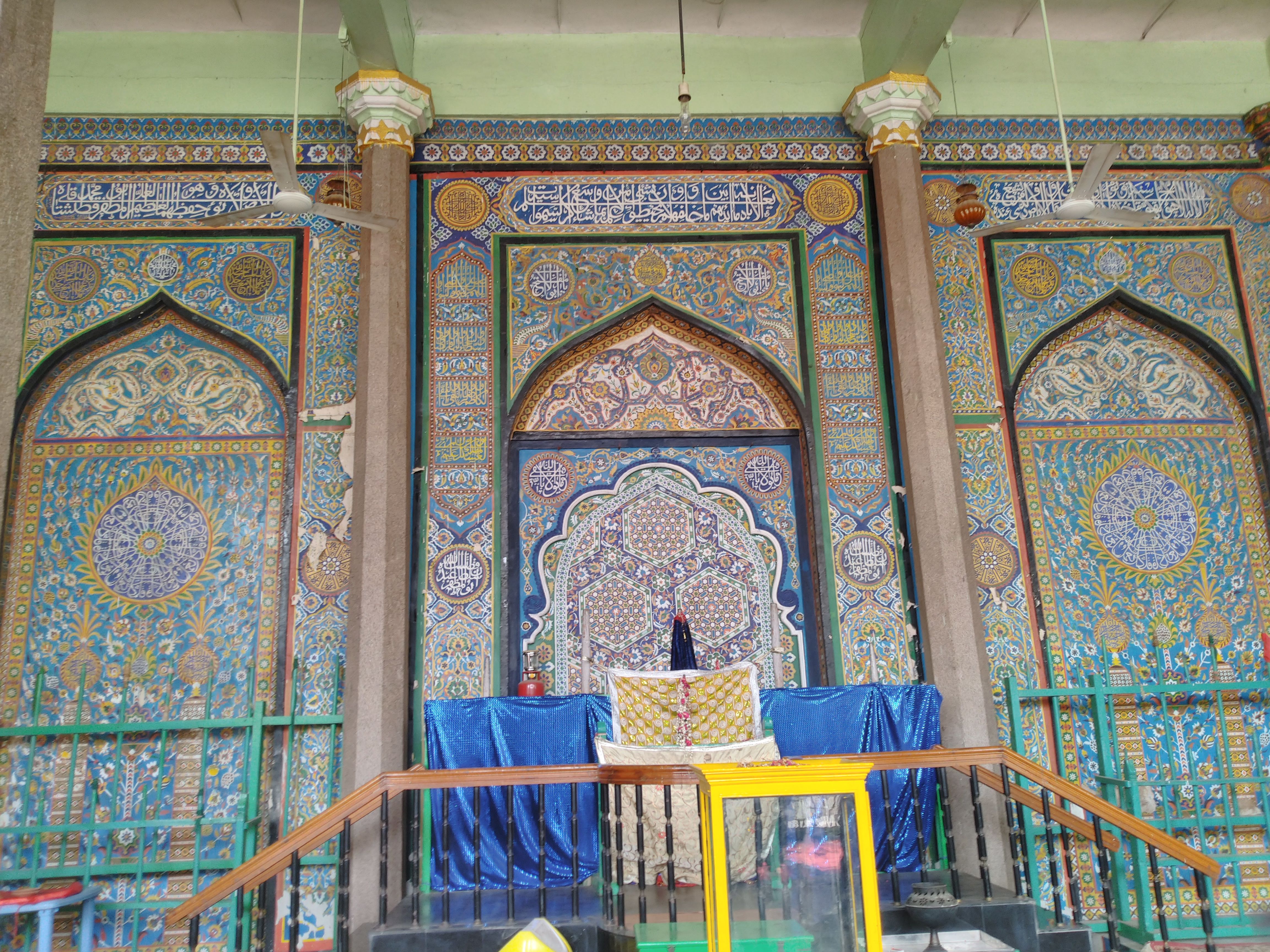 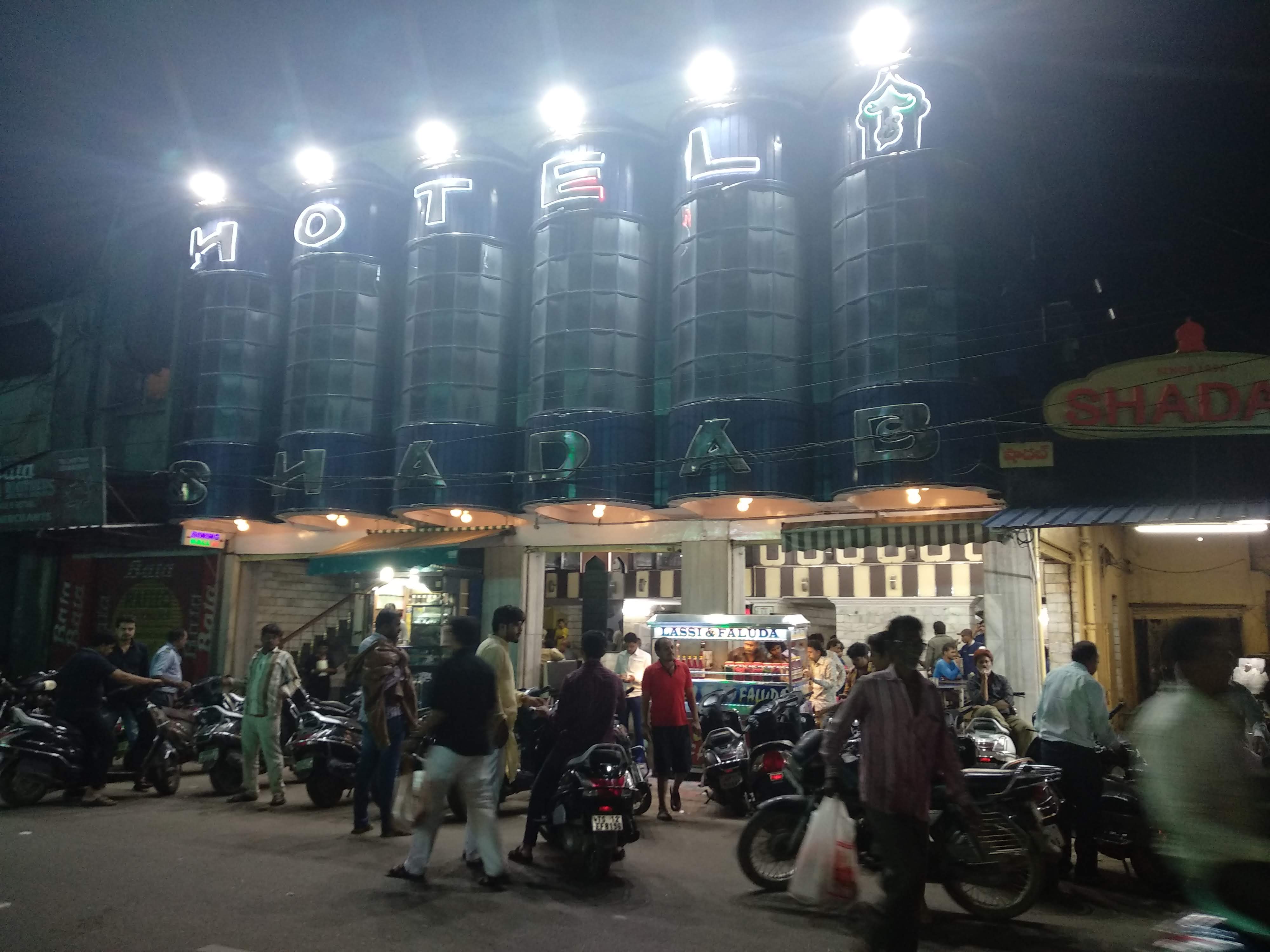 Head past Charminar for a kilometer and take a turn at Madina Circle onto High Court road to find Hotel Shadab. There are a few heritage structures around inluding Badshahi Ashoorkhana and the state high court. Visit them to exprience the aesthetics and history. Note that Badshahi Ashoorkhana is a religious place and might need females to dress modestly and wear a head covering. The Badshahi Ashoorkhana still retains shiny enamel tiles laid four centuries ago and has an enamouring design. The high court was built in the Saracenic style by the seventh Nizam on the ruins of Qutub Shahi Palaces.

Enjoy the cafe-like or Takht style seating on the first floor and order a chicken biryani. One biryani serves two. You can order a “Thums Up” to go with it if you are the carbonated soft drink type. Enjoy the biryani with raita and mirchi ka salaan served alongside.

Walk past Charminar for a kilometer and half to find the Matwale Doodh Ghar Lassi & Faluda shop opposite Darussalam Bank. Order the Special Lassi to cool things off. The special lassi is a lassi mixed with Khova(sweetened and thickened milk), icecream and rose syrup (Rooh Afza). 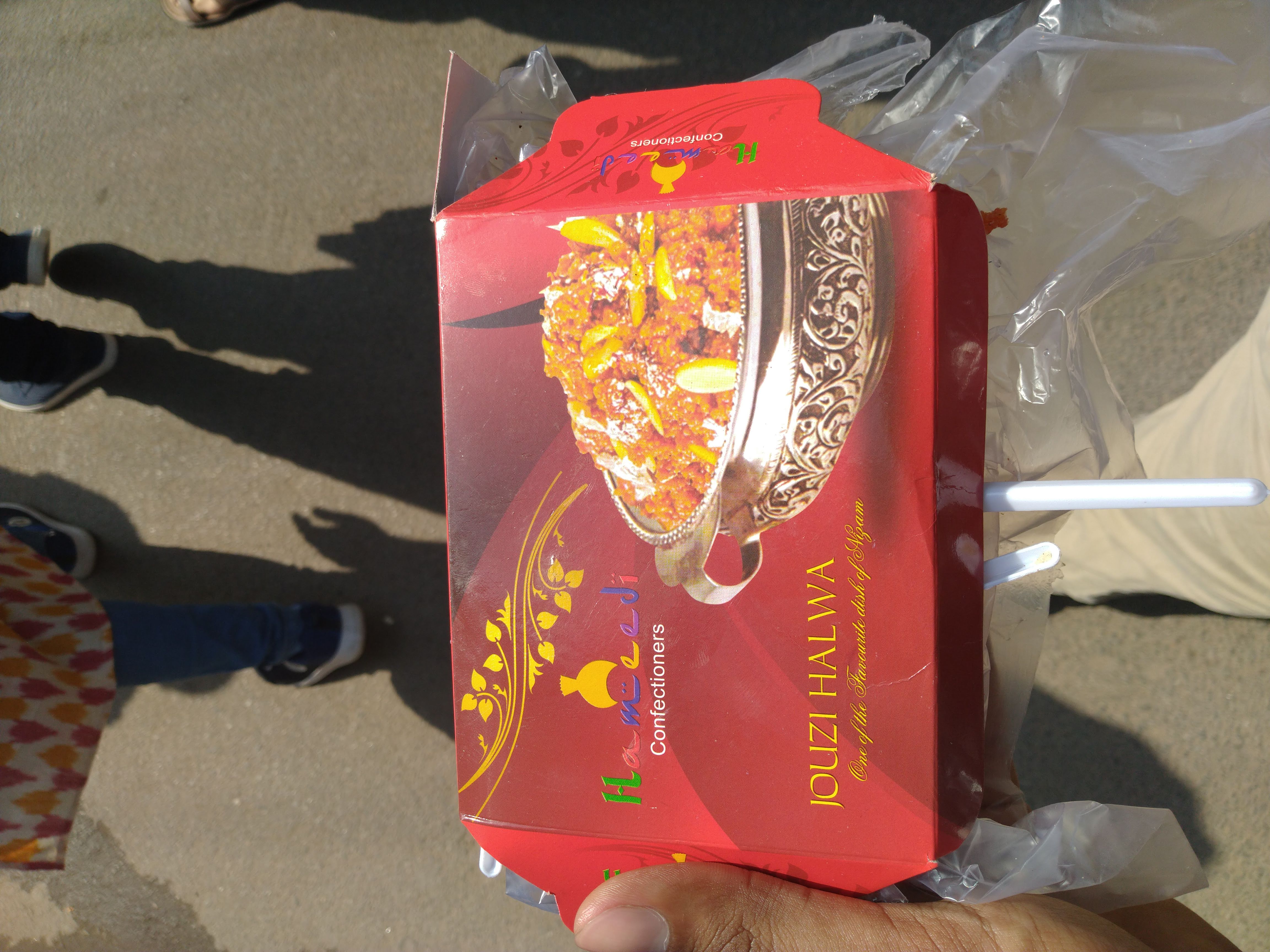 On the way back to the city, Visit Hameedi Confectioners which is situated just opposite the Mozamjahi market. Hameedi Confectioners began as only a stall in 1913, when a 15-year-old Turkish boy, Muhammed Hussain, started selling sweets. His special dish, the Jouzi Halwa(from. Jauz/nutmeg) was such a hit among people that the seventh Nizam heard of it and visited the store to try it out. He loved the halwa to such an extent that he sent a letter with the royal seal to Hussain praising his sweets (Even today, this letter is on display at the store).The Nizam loved the sweet so much that he announced that the shop be named after his brother-in-law, King Abdul Hamid of turkey(accounts vary, some say it’s named after his son’s nickname). The sweet shop sells turkish dishes, one such dish being the special Jauzi Halwa. The Ashrafi sweet here is worth trying too. They sell a quintal of the Halwa every day.

One can wander over to the Mozamjahi market to shop and have a look at the clock tower. Constructed in 1935 by the last Nizam, it has many shops now and also houses a very old famous ice cream shop aptly named “Famous Ice Cream Shop”.

This concludes a lengthy gastronomic and cultural tour of the surroundings of Charminar. Of course there are always more places to see and more dishes to sample. I will note down a few worthy of mention, Interested folks can fit some of them into their itinerary.

River Musi and the Salar Jung Musuem at sunrise 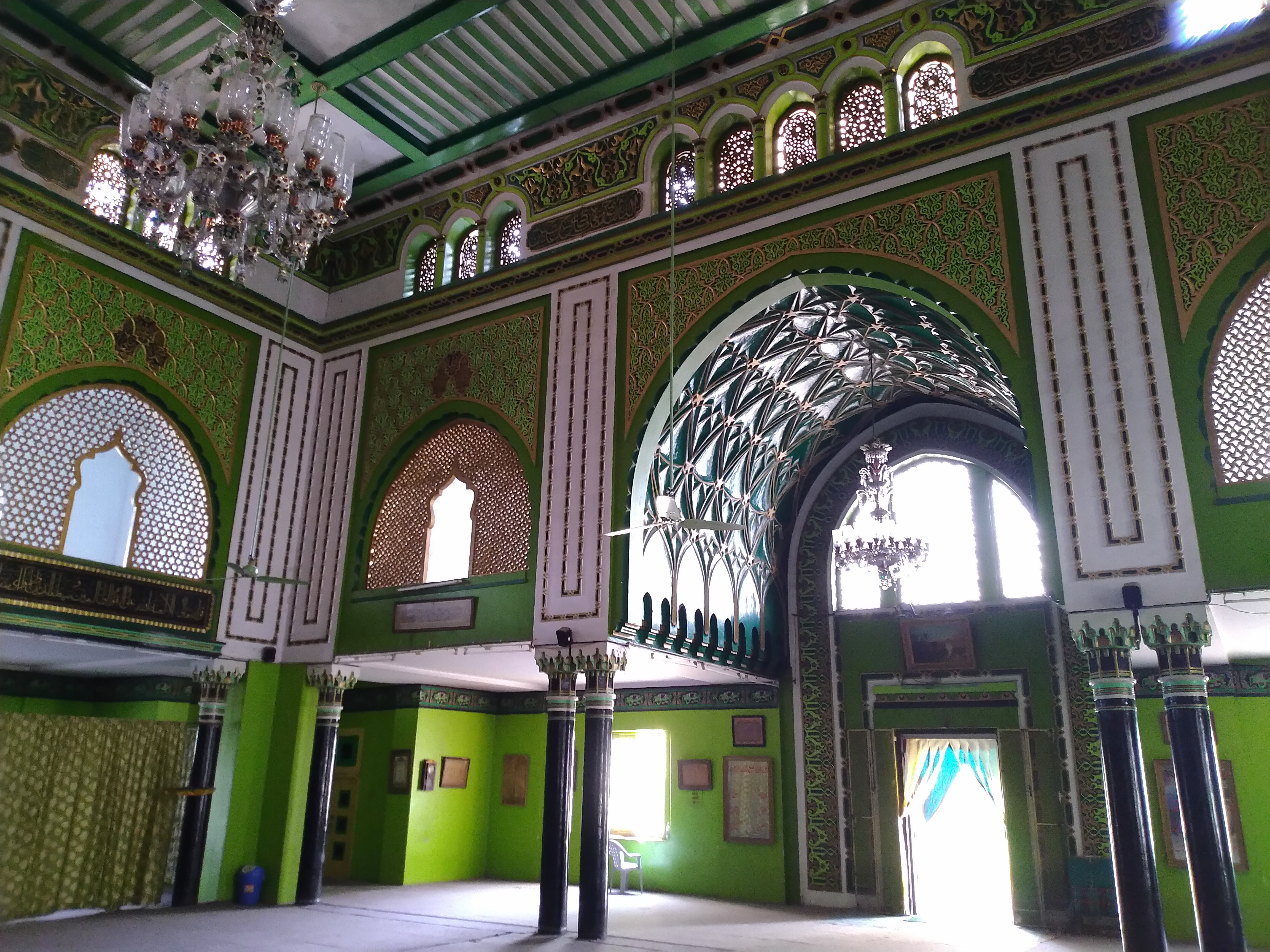